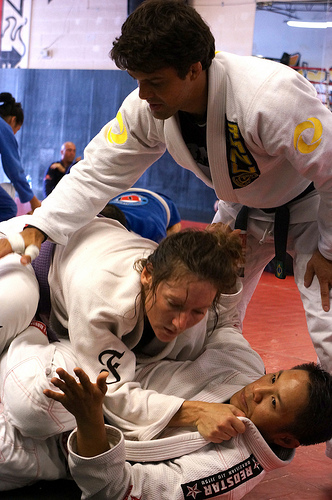 Man with a Plan


For a guy who tops out at 5’5” in his flip-flops, Robson Moura is definitely not afraid of heights.

Having grown up in the Pimentel favela of Teresopolis, on a misty mountain outside Rio, Moura now stands on top of the world of BJJ.  And in a sport where inspiring stories are common, Moura’s stands head and shoulders above the rest.

Being from the favela is something that non-Brazilians (and privileged Brazilians) have a hard time grasping.  We have bad neighborhoods in Cleveland.  Big deal.

But as Rio native Eduardo Rocha said when comparing a sketchy Oakland arondissement to the favelas of Brazil, “You call this a bad neighborhood?  This is Disneyland.”

Moura describes in his Youtube video “Life in the Favela” how Brazil’s shantytowns are a world unto themselves.  People are born there, go to school there, work there, and die there.

But if Robson Moura didn’t want to die in the favela—and he could have, with the stray bullets whizzing by his head—he definitely didn’t want to live there.

“I just kept saying to myself,” says Moura, “I gotta get off this place.”

That Moura succeeded—big time— is common knowledge.  Robson Moura may not be the biggest guy on the mat but his name is one of the biggest in BJJ today.  Furthermore, Moura is one of those rare martial artists whose appeal seems to cut across lines of team loyalties and BJJ politics.

When I confided to a Pedro Sauer brown belt that I had become something of a Robson stalker, he just shrugged.

“If you’re gonna stalk somebody,” he said, “might as well stalk the best.”

I will admit that before meeting him personally, Robson Moura was just another multiple time world champ to me with an R name pronounced as an H. To my newbie blue belt ears, they all sounded the same.

But when Moura came to do a seminar at Dudu Barros BJJ in Akron, I became a believer.

It’s not just because we all love winners, even though with seven world titles under his A1 belt, Moura is the definition of winner.

And it’s not just because Moura is a nice guy, which he is.  Moura is one of those rare people who ask you how you are and actually listen to the answer.

Moura treats everybody who steps on the mat with the same courtesy and respect, and a sense of humor that is as unexpected as his moves.

At a seminar at Elite Jiu Jitsu in Delaware (Moura’s first North American academy, now run by Jeff Mitchell), somebody outlined a particularly difficult situation for Moura, ending with the usual “What would I do then?”

Moura thought about it for a second before answering, deadpan.

If I had to guess, I’d say people adore Moura for all of the above and for one more reason as well—he made BJJ fun again.  Moura’s style is like a puppy going after a bedroom slipper—intense, tenacious, fluid and beautifully joyful.

Joy is something we don’t think about too much on the mat.  We’re too busy trying not to drip on our training partners and maybe land a move or so. And to the Type A personalities that typically crowd American mats, Jiu-Jitsu can seem like very serious business indeed.

But Robson Moura feels strongly about the idea of playing jiu-jitsu vs. fighting jiu-jitsu.  According to Moura, the gym is the place to play jiu-jitsu—to have fun and try new things.  Competition, in Moura’s view, is when it’s appropriate to really fight jiu-jitsu.

Robson Moura turned the game upside-down—literally. And while some of us labor to think outside the box, Moura doesn’t seem to have a box. His game is constantly evolving, both to stay competitive in a highly competitive sport and just, apparently, for the sheer hell of it.

Constantly evolving, innovating and growing, Robson Moura is both an inspiration and one heck of a nice guy.

This winter, I had the opportunity of training at the Robson Moura Academy in Tampa, Florida.

Here is what Robson Moura had to say:

Q:  After getting out of the favela winning the worlds seven times must have seemed like no big deal.

Robson Moura:  I just kept saying to myself, I have to get off of here.  But when I was about 15, my family had money problems.  And my pai, my father said to me (angry voice) “You have to work, you have to start to make money!”

But I was taking the bus all the time to train, it was an hour and a half one way, I was going back and forth a few times a day, and I knew if I started to work I wouldn't have time for Jiu-Jitsu anymore.  I knew that would be it.

And I said to my mom, “Mom I know I can do something with this,” and she said, “Don't worry, you keep doing this, I will take care of your father.”  And that's what happened.

Why is it so hard to get out of the favela?

RM:  One thing, you know, some people, people I grew up with, they started to take a bad way.  They started to walk around with guns when they were like, 14, 15, and they wanted me to take the bad way too.  They started to give me a lot of problems, wanting to fight me all the time, and I was like, “Man, I'm trying to get off of here, to find a better life, you should too.”

And one time, it was late, like midnight, when I got back to Teresopolis, I got off the bus and these two guys were there.  They were my friends, I grew up with them, but then they started hassling me, giving me a hard time, and one of them had a gun.

There was nobody around.  And these guys they just kept talking to me like that.

But then this guy that lived there, this neighbor, he came out of his house, and he said, “Come on you kids, go on home, that's enough,” and they did.

And a few weeks later, one of these guys got arrested and went to jail, and the other one got killed.  So, I'm not saying I was happy about it, he was just a kid, but...

But it gave you some room to breathe?

How did you end up in Tampa?

When I first came here, I was in Delaware.  I didn't know any English.  I didn't even know how to say “Hi.” I was there for two years.  And it was so cold.  It was cold all the time.  And I started to get really depressed.  I never wanted to leave the house, I just wanted to stay on the couch all the time, my hair got really big (his gesture indicates circumference, not length), my beard was so big, and my wife said to me, “You have the depression.”

And I said to her (cold voice), “I have no idea what you are talking about.” I had never even heard of that.  We don't have that in Teresopolis.

And then I started to find out about it and I understood that maybe she was right.  And I knew I had to find someplace else.  So I spent like a year just looking around for a place I thought would work for me, and I found Tampa.  Tampa is on the ocean and the ocean for me is, is.... It's big.  And I like the town.  It's not too big, not too small.  And I really like our location.

One thing about me is, if I have an idea, I have to do it right now.  I was talking to my web guy just now about an idea for the website and he said “Yeah, I'll get it done in a few days,” and I said, “No man, you gotta do it tonight.”  If I don't do something right away I can't sleep.

How is the USA different from Brazil?

Brazil is a great place to do business right now.  A lot of opportunities.  The economy is growing.  But it's not easy.  Everything is complicated.  There's a lot of corruption.

I remember one time, I was still really young, I was driving back from training, it's like an hour.  It was late at night, and it was so hot.  I didn't have a shirt, I was just driving with all the windows down. And the Federal Police stopped me.  And I was like, What did I do?  I had my license, my registration, my insurance, everything was in order.

I could have got him in trouble but I was like, you know what, I have to drive here all the time, I don't want any problems.

What do you prefer to be called?  Robson?  Mestre?  Professor?

You must have a preference.  Sensei? Mestre?

Some of my students call me Professor.  I like that.  Mestre seems so, you know...too much.

Yeah, you only won the Worlds seven times.  That's not really that many.

What's your next big competition going to be?

That doesn't even seem fair.

What's coming up next?

This is a really busy time.  In March I'm going to be in Hawaii for a week training.  This place I'm gonna be, there's nothing.  Just the beach.  There's gonna be nothing to do.

I told my wife, Alessandra, she has to come too, because otherwise I'll be there a whole week with nothing to do.  Sometimes she says to me, Okay let's go on vacation but you have to promise, no training.  No jiu-jitsu. But a vacation without training is not a vacation.

How do you make your decisions?  Would you say you’re more rational or more emotional?

You gotta be smart.  You can’t make business decisions with your heart.  Everything I do, I always have a plan.  When I bought my first house in Brazil, the deal was if I missed a payment, I was gonna lose the house.  The guy looked at me like, “This kid is crazy, where’s he gonna get the money.”

Another private is over and so is my week of training. Feelings of regret mingle with relief in an emotional 50/50 guard. On the relief side, I seem to have gotten through four days of training without making a complete ass of myself and there is the satisfaction of quitting while I am ahead. On the regret side, I am about to say goodbye to 30 of my best friends.

That’s how it feels when you train with Robson Moura. To be honest, I hadn’t known what to expect.  I was just hoping to slither under the radar in what I imagined to be Cirque du Soleil-esque workouts at RMNU Tampa.  In actuality, I was not only tolerated, I was welcomed.  Every class began with a steady stream of handshakes and smiles as per Robson’s policy of making newcomers feel at home.

But all good things must come to an end.  I look at my feet.  After a week of three-a-days, they look like they have been chewed by coyotes.

Robson looks at his own foot, measuring it with his hand.

Do you have trouble finding shoes?

Probably saves you a lot of money.

On October 25-28 Robson Moura will be hosting the first annual RMNU Conference Training Camp in Tampa, open to all RMNU and Nova Uniao members.  See robsonmoura.com for details or go on Facebook and Like the Robson Moura Nova Uniao Jiu Jitsu Association.