Mobile Blackbelt - Chokes App for the iPhone and iPad

We live in an information age where everything is accessible to us at the click of a mouse. For Brazilian Jiu-Jitsu practitioners there are many ways to supplement your education outside of the academy. Sometimes picking through youtube can be tedious, and expensive dvd sets can really make a serious dent in your wallet. Furthermore, to digest either these content heavy mediums it can take over a year or two.

In the past couple years the new platform seems to be mobile devices. Of course owning an iphone I see many new BJJ Apps that have become available. I decided to take a look at one of the more popular apps called “Mobile Black Belt”. There are a few different apps by these guys but the one I downloaded was called “BJJ Chokes” for $4.99 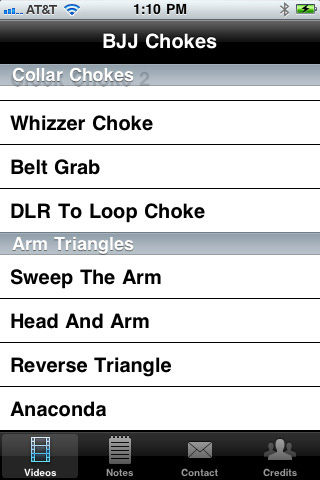 The app took a little while to download at 316MB. It’s an app that you’ll want to download from a wifi connection, not on a cell network. I opened up the app, approved the terms and conditions and was brought to a screen with a list of twenty techniques. At the bottom were four buttons. The only button that really had any relevant content was the “videos” tab, which was highlighted by default. My first reaction was, “where’s the rest”. I had seen technique videos before, we make a lot of them on bjjweekly. I thought, “these techniques better be something special”. I selected the first choke called “Shoulder Roll Choke”. The video loaded up very quick and immediately caught my attention.

The video itself was shot in a warehouse but there was something different about this I had never seen in a bjj video…it was done by professionals with professional equipment. The lighting was incredibly well done and immediately caught my attention and sucked me in. I have personally produced national tv commercials in the past and I started saying to myself “That was shot from a dolly, that was shot from a jib, the smoothness of the camera work really grabbed me. Initially there was no talking, only soothing zen like background music and some cool titling. This video was not simply shot from one or two angles. The video was shot from every angle one needed to digest the technique and the editing really told a story. Fifteen seconds into the technique a voiceover started. The person was obviously Brazilian, but the tone of the voice added to the story that was already being told. I was completely engaged by this time and thought, “I gotta see more”. 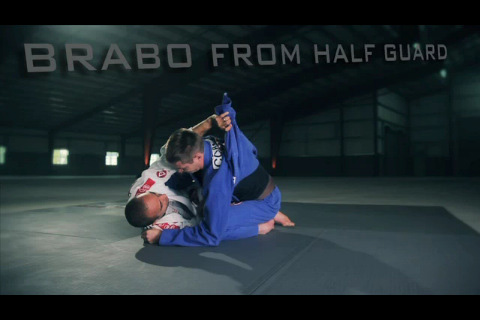 I sat there and watched every single technique back to back. The techniques were great, executed with precision and they each told a story. There were no in depth details or technical breakdowns of how, why or when someone should apply the technique but I am not sure there needed to be. I was simply amazed by the production itself and immediately knew why is cost me five bucks to download, this was not cheap to make.

How would I use this app? I am not sure I would use this app as a “learning tool”, but I really liked watching it because of the cool factor. It was very enjoyable from a entertainment perspective. The techniques are all techniques that I use or have learned in the past but they are presented in a format that would be more of a refresher for someone that was not learning them for the first time. I could however see a white or blue belt showing this to his instructor and then the instructor breaking down the details for the student. I mean, there is only so much you can pack into a minute long technique.

Overall I think Mobile Black Belt really raised the bar. The cinematography was incredibly well done. The editing was thought out and executed with precision, and the app was easy to use. As an app for entertainment and or refresher purposes I would give it a 5/5. If I was looking at this from an instructional perspective I would give it a 3/5. I am not sure I would spend $5 bucks again though. I think $1.99 would be better suited, and if they had twenty apps at $1.99 I would certainly buy all twenty!