THE BEST OF MGinAction DVD Review 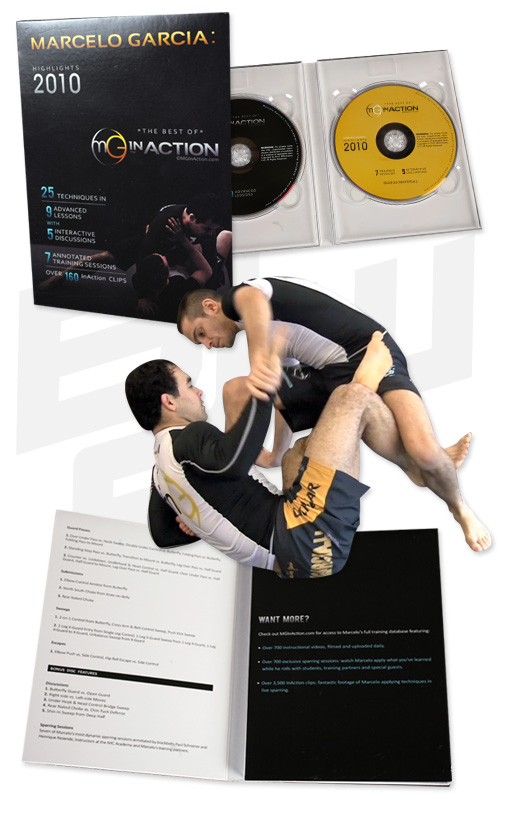 In this review, we are covering the MG in action 2010 highlight video, featuring the best footage of the year as seen on www.mginaction.com.  This DVD provides only a handful of different techniques, however they are presented in mind-blowing detail.  Students of this two-disc set receive dozens of concepts, mechanics, and entries related to what are a handful of techniques straight from Marcelo's bag of tricks. Arguably, this is much more applicable than watching twenty techniques in a single sitting, only to forget it moments later.

If you are a moderate to advanced level grappler, it is likely that you know, or have encountered many of the techniques seen in this DVD, but it’s doubtful you are aware of all the intricacies that Marcelo presents on MG in action.  Marcelo discusses common scenarios relating to the technique he is teaching.  As the technique is explained, the details are reinforced by a second overlaying video showing actual rolling footage providing a sort of technical proof of concept.

There were periods in the lessons where I struggled to understand what Marcelo was saying, but with such great visual presentation, the occasional issue in audio clarity was never a problem.  The technique section of the DVD acts as more of a technical briefing of what is to come on disc two.   This, for me, was where the true learning took place.

The “annotated training sessions” found on disc two are phenomenal.  It is the subtleties found in each roll that make this a great resource.  Be warned, if you are looking for highlight style, shock and awe footage, you will be sorely disappointed.  These rolling sessions are an educational resource displaying the same techniques shown on disc one, and they are used with such frequency that one cannot deny their effectiveness.  Students will see the same one-legged x-guard techniques, butterfly guard arm locks, and north south chokes over and over.  However, the setups are rarely duplicated from one technique to the next.  The repetition never becomes tiresome, it only provides emphasis that this stuff actually works.

The commentary from Marcelo’s students during the roll makes for a very engaging experience.  After spending so much time on the mat rolling with him, their insight into how he performs during a roll provides a sort of technical play by play for the sparring session. This gives insight that may have been overlooked by less experienced grapplers.  Marcelo’s game changes very little from different sparring partners, and this is surprising as his opponents range anywhere from very high level blue belts, up through world class black belts.

In my training sessions, since viewing this DVD, I can say that there has been a definite impact, especially in the area of the sitting style guard.  On multiple occasions I have found myself attempting (with mixed success) to offset my opponents balance to set up for ankle picks, push kick sweeps, or to simply create an opening to get into a different position, such as x-guard.  In just a single viewing of this two disc set, I feel as though I have picked up some great concepts, and without a doubt with addition iterations, I could pick up more of the subtle details found within.  Fortunately, there is enough entertainment value in this DVD, that repeat viewings will be an enjoyable experience.