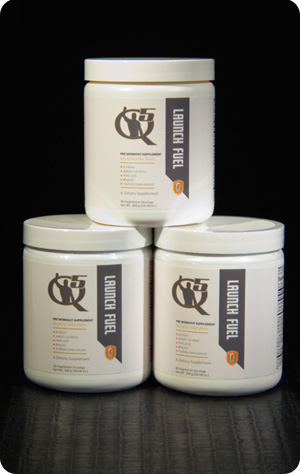 I was a competitive power lifter and BJJ practitioner from 1998-2007. To pay the rent I worked in a vitamin shop. I think I’ve tried every pre-work out, post-workout, and interim-workout formula that’s been brought to the American market. Probably the UK, French and German markets too!

One issue I have always had with pre-workout elixirs is the unhealthy doses of stimulants like caffeine (methylxanthine), synepherine, tuarine, DMAA, and guarana  just to name a few. That’s one of the things that interested me about Q5’s new Launch Fuel, it doesn’t have any artificial stimulants.

This formula has natural and metabolically functional enzymes, ATP co-factors, phytochemical adaptogens, amino acids, and pentose sugars (found in nucleic acids) that provide the body with a reserve of molecular components to efficiently drive cellular energy for the endurance, interval, and combat training athlete.

After about 20-30 minutes I began to notice a mental clarity, sort of like you might feel after a night of great sleep. I also had a natural sense of energy and felt like my body was prepared for the day’s training challenges. I found it was most helpful on the days where I was focused strictly on working my body to failure. I would take half a serving prior to training, and mix the other half to sip on throughout the workout. This dosing method allowed me to continue training at max intensity for longer durations as opposed to training without it.

It won’t replace hard work, a clean diet, and proper rest, but adding Q5 Launch Fuel to your training regimen might just help to unleash the warrior within you.

He began martial arts training at the age of 13 in Tae Kwon Do, and later studied American Kenpo Karate. In 1998 his Sihing introduced him to the art of Brazilian Jiu-Jitsu, which he still obsesses over today. Before suffering a back injury in 2008 Drew trained with Rodrigo Pinheiro Brazilian Jiu-Jitsu in San Antonio, Texas.